Trouble on the Blue Nixie

First, I am not going to give a blow by blow accounting of the session almost everyone was there. That being said, there are some highlights.

Combat started not when someone missteps and blew a stealth roll, it was a vigilant smuggler that heard then spotted with his bullseye lantern some vagabonds sneaking aboard during his watch. The smugglers were awaiting another ship to rendezvous. The smuggler’s shot went wide and pocked into the mizzenmast just over Erdan’s shoulder as he ducked for darkness. “Those sneaky-ass Drow”, the man cursed as he now had to draw his rapier.

Meanwhile under the quarterdeck, Boris and Siay had made good progress in the darkness of the aft gundeck to have found the bulkhead of the Captains quarters. Siay felt along it until she felt the hinges of the hatch. It was the shot from the bows that called the smugglers to arms. They burst from the Captain’s mess only to be surpriised by Boris standing on the gundeck saber in hand. A breif melee ensued with pistol shots being fired in close proximity. Two of the smugglers went down but not without a price. Siay paid that with a deep wound to the breast…

On the maindeck, Antinoro fired at smugglers pouring out from the focsle. He clipped one and she dove into the cargo hold. The others now aware of his presence turned to fight. Iri howled and distracted the one known only as Bjorn, giving the Darkmoon an opportunity to strike mortally wounding the man. [GM Note: I cannot remember who was distraught at this ironic turn] It was Iri and Ara that turned this engagement. Ara causing the darkness to close in on them, enhancing Iri’s menacing trade. The superstitious lot cowered in fear.

Screams and commotion were heard as it was likely that something very dangerous broke loose and was in a frenzy below decks.

The fight left the smugglers as they started to take grievous wounds and were simply not paid enough to die for some stupid animals as Bjorn later put it. With half their number wounded and demoralized they began to surrender.

The fight over, Iri gave aid to Bjorn. Boris effected the capture of Soller Vark, and took his rapier among other things as prizes. Lavinia’s payment was also found on the scoundrel. The captains quarters were searched and the signet ring was found with a scrap of paper rolled up in it.

A quick debate over the fate of the villain ensued….

[GM Note: In closing the session I thought about my decision regarding the alignment system from D&D during my development of this for GURPS. I had decided not to use it because of GURPS character creation process. So I had to ask during the session for the players to please review your characters and play them as you conceived them. How is your character going to react to the events he/she is witness to. What if anything will they do? Some of you remember Jonas. The reason he is memorable I believe is because I played as he was written. He refused magic aid, he was after-all a magehunter. What’s more is he was a man of honor. He realized that his actions and his leadership caused the death of innocent people. He had to submit himself for justice, and paid the ultimate price. Not that anyone of your characters is that way. What I am stressing is make your character come alive by playing him or her they way you envision them behaving and reacting. All of us have a moral compass so do your characters, follow that and your journey will be one to remember.

From my point of view I thoroughly enjoyed Session 1. Aside from some technical issues, when are there not right; the session went really well. I hope you all enjoyed it as much as I.]

A Noble in Need

An Offer They Can't Refuse

About a month ago the somewhat famous Vanderboren’s perished in a tragic fire aboard their newly christened caravel, Countessa du Blanc. The harbormaster and city watch concluded that a stray spark must’ve started the blaze. Larissa and Verik were able to save several of the crew members lives at the expense of their own. The final investigative report is still not due to be published for another few weeks. However, an unnamed source says Boris Romanello may be at fault.

The Vanderboren’s daughter, Lavinia has a problem. The family vault is locked and she does not have a signet ring to unlock it. Normally she would have had her mother’s ring but it was lost over a month ago. She has some help in the form of the Jade Ravens but has already tasked them to go to the City of Cauldron. This left her with recruiting more help.

Several individuals of some repute stood out to her. Thus she sent her trusted servant Kora Whistlegap with a message 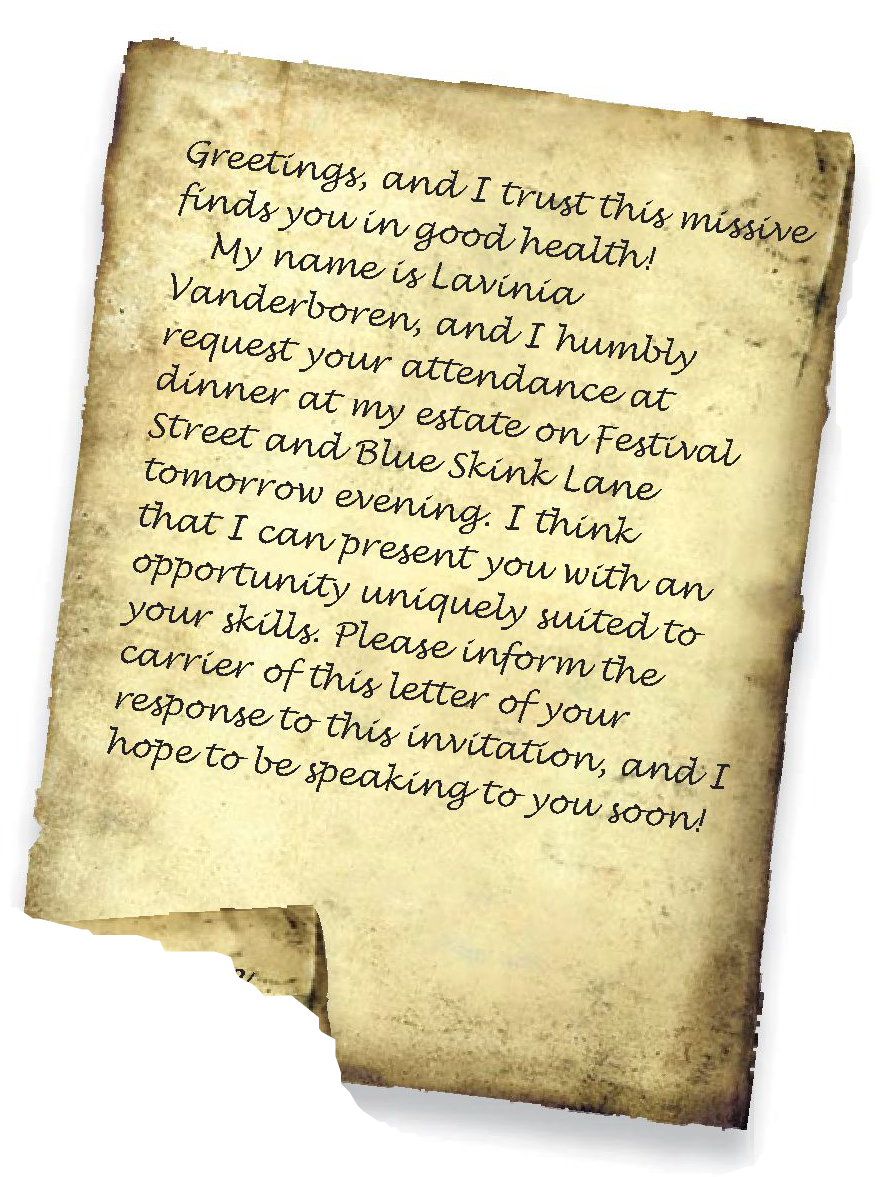 To the last they accepted.

The first thing the group did was reconnoiter the vessel. They found that the Blue Nixie was not moored at pier 5 in the Merchant’s District as indicated. She was in fact anchored just over 30 yards from the pier. Boris asked around and found that the harbormaster’s man, Soller Vark had some sort scheme going on. A little further digging uncovered the scoundrel was using the Blue Nixie as an exchange point for smuggling exotic animals.

Waiting until dark the adventurers “borrowed” a skiff and rowed out to the their target. The plan was to sneak aboard, venture to the captain’s quarters and search for the lady’s signet ring.

All was well as Boris and Siay boarded without being spotted. The next two were Erdan and Antinoro. The guards did not at first see the two as they clambered over the gunwhales. When Antinoro ventured forward was when his boot-steps were heard. The guard on the forecastle focused his bullseye lantern in the direction of the sound and spotted Erdan on the main deck. The guard alerted his companion stationed on the poop deck.

This was a session Zero-point-five. Players may still make adjustments to their characters as long as the are done and submitted before Session 1. Overall I believe the session went well; with a few technical difficulties that were easily overcome and the session moved forward smoothly. I look forward to reading character journals as well as any suggestions from the players to improve game-play. I personally enjoy running this adventure path. So much so that this is my fourth repetition and I am converting it from D&D to GURPS. It is my hope that the players are enjoying this as much as I do.

Welcome to the campaign site.

I will post regular updates here as well as news, schedule changes, and so on.

This log is set up to push updates. Send me a good email and I will add you to the list.